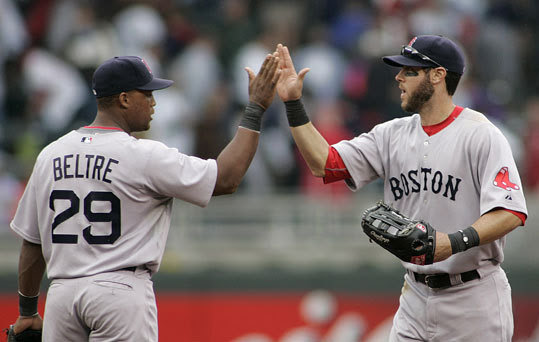 John Lackey went six solid innings, allowing just two runs in getting his first win in a Red Sox uniform, as the Sox rolled, 6-3. It was their first outdoor win in the state of Minnesota since 1981.

Jeremy Hermida had the key hit, a three-run double with two outs in the eighth that put the game away at 6-2. (Daniel Bard gave up a homer to Michael Cuddyer leading off the bottom of the eighth.) Jonathan Papelbon walked two in the ninth and made it interesting, but got his third save.

Dustin Pedroia belted his fourth home run of the year. Permit me a rant here, if you don't mind. As Pedroia was running around the bases, the knucklehead fan who caught it threw it back on the field, to the brief applause of the Twins faithful.

Do any of these fans have any sense of history? It was just the second home run hit at the new Target Field, and the first opposition blast. I know it's become chic to throw back when an enemy hits one out (thankfully, you can't do that at Fenway, as you will be ejected from America's Most Beloved Ballpark if you do it). It was also the first opposition one hit. I'm not thinking about money here, but it is something you can show to the grandkids one day: "I caught the second home run hit at Target Field. Here's the ball." No, that guys would rather get some cheap applause that lasted just fleeting seconds. You can thank those Cubs fans for starting that moronic trend.

It also reminds me of that fan who threw back Grady Sizemore's grand slam at the opener of the new Yankee Stadium last year. First granny at the new joint and the guy didn't want it. Dumbass.

I've been going to games for over 40 years, and I've never gotten a ball, fair or foul. Before I die, I want one, and it won't matter who hits it.

Rant over. Thank you for your indulgence.

The Red Sox are now 4-4, and complete their series and road trip Thursday at Target Field, with Tim Wakefield and his dancing knucklers taking center stage.
Posted by The Omnipotent Q at 11:11 PM

Do people think the run will come off the board if the ball goes back over the fence?

They just think they are being cool. They come off as dorks.