The Yankee You Least Despise

Has the road finally come to an end for Mariano Rivera?

As everyone now knows, the Yankees closer was injured yesterday when he was shagging fly balls in the outfield before the Yankees game in Kansas City, and in trying to make a catch, he tore the ACL in his right knee and is likely lost for the rest of 2012. There was speculation during spring training that Rivera would call it a career after this season, so we may have seen him throw his last pitch. 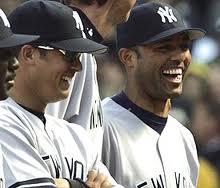 Rivera will be 43 by next Opening Day, and it is quite rare to see any athlete have major surgery after the age of 40 and make a complete recovery. He keeps himself in great shape without doubt, and showed no signs his career was seriously waning when he got hurt yesterday. Only Rivera can answer the question of retirement, and he probably won't until his surgery and recovery is completed.

The reaction to Rivera's injury has been shock and dismay, even from Red Sox fans around the Internet. There is a universal respect for the man, and not just because of his record. He carries himself with grace. He's not a braggart or a showboat, although with his record he well could be. He is a religious man, and doesn't show anyone up. (I remember when he was once asked about his entry music, "Enter Sandman" by Metallica. He said he doesn't listen to that kind of music, and prefers Christian music. But since the Yankees once played it early in his career, it stuck.)

In September 2004, I was at the Riviera Cafe in Manhattan watching a Red Sox-Yankees game when the Sox were down 2-1 going to the 9th. Rivera was coming in and I turned to my friend Eric and said, "He's not infallible. We bet him before, and we can beat him again." And that was the night the Sox rallied for two runs and won, 3-2. And every time we'd see Rivera come into a game in the ninth and I was with Eric, I'd turn to him and say that exact same line. And many times it worked. (Remember Games 4 and 5 of the 2004 ALCS?)

I guess you could say Rivera is "The Yankee You Least Despise" if you are a devout Red Sox fan. He earned that title when he was introduced at the Opening Day at Fenway in 2005, when the Sox unveiled their championship banner and handed out the rings. Rivera was introduced and was given a mock standing ovation by the Fenway faithful, and he handled it the best way he could: by smiling and tipping his cap (pictured). I was also at Yankee Stadium the week before, when the Yankee fans actually booed Rivera off the mound, when the Sox rallied for 5 runs off him in the ninth and won.

It will be a tough return if Rivera ultimately decides to give it one more go. Age catches up to everyone, even the so-called greatest closer of all-time. (I always phrase it like that to piss off the Yankee fans I know.) Rivera is a first-ballot Hall of Famer for sure and has nothing really more to play for. He's got five championship rings and the most saves of all-time.

I'm betting we haven't seen the last of Mariano Rivera on a pitching mound just yet.
Posted by The Omnipotent Q at 11:10 AM