The Pestilence of Interleague Begins With a Loss 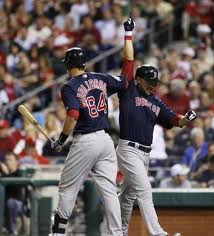 Yep, interleague play is back. Ugh.

Daniel Bard put the Red Sox in a 4-0 hole last night in Philly, a hole that turned out to be too much, as the Phillies went on to a 6-4 win.

Bard walked three in the first, and all came around to score.

Jarrod Saltalamacchia and Cody Ross both left the game with injuries, and both are day-to-day.

The Sox hit three home runs, but they were all solo shots by Mike Aviles, Cody Ross (pictured) and Adrian Gonzalez. It was 5-4 in the 8th when Freddy Galvis hit a homer off Franklin Morales to make it 6-4.

That set up the first appearance by Jonathan Papelbon against his old club. Kelly Shoppach opened the inning with a sharp infield single to third. Two batters later, Marlon Byrd hit a ball to short that Jimmy Rollins threw to first, and it appeared to have pulled Ty Wigginton off the bag. (All replays were rather inconclusive.) But that brought Bobby Valentine out, and he made his point rather vociferously that Byrd was safe, by jumping up and down a few times that Wigginton came off the base. He got tossed for his trouble.

Nick Punto struck out on three pitches to end it.

Jon Lester goes for the Sox tonight.
Posted by The Omnipotent Q at 10:55 AM