Youk's Back & Provides All The Offense 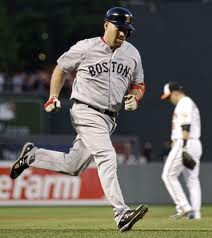 It was one of those nights when the Red Sox offense was completely neutralized, and by a fine pitching performance by the O's Brian Matusz.

The Sox got just two hits all night, and one was in the second at-bat of the newly-returned Kevin Youkilis. Youk was activated and played first base, while Adrian Gonzalez returned to right field. (Cody Ross and Ryan Sweeney were both put on the DL, and Scott Podsednik was brought up from AAA last night.)

Felix Doubront pitched another fine game, striking out nine in six innings. He also allowed just four hits, but one of them was a two-run homer by Steve Tolleson.

Podsednik is in the starting lineup in today's finale in Baltimore, and he will become the 39th player to play for the Red Sox in 2012. Already.

And should the Sox win today, they will conclude the eight-game road trip at 5-3. Daniel Bard starts for the Red Sox today.

You may have heard that this past weekend, a onetime Sox player named Babe Ruth had one of his jerseys sold at auction for a record $4.4 million. Here's Pete Nash of the Hauls of Shame and his take on it.
Posted by The Omnipotent Q at 11:12 AM