The Night of the Rodeo Clown 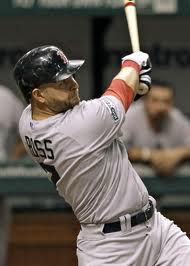 The Red Sox gained a split of their brief two-game series at Tampa Bay with a 5-3 win. The man who blamed himself for the loss on Wednesday night turned out to be Thursday night's hero: Cody Ross.

Ross blamed himself for the lead run scoring on Wednesday when he stumbled catching Luke Scott's sacrifice fly. But the man who has always wanted to be a rodeo clown hit his 7th home run of the season and drove in four of the five Red Sox runs, including a single to bring in two in the eighth.

Felix Doubront got the win, going 5 2/3 innings, and allowed two runs, one earned. He left with second and third, but Rich Hill got the last out of the sixth to keep the lead.

The bullpen did another nice job last night, as Bobby Valentine mixed and matched last night. Alfredo Aceves got a four-out save, including a 1-2-3 ninth to wrap it.

Tampa Bay had all kinds of chances to score, and left 12 men on base last night.

The Sox now head to Philadelphia, and meet up with old friend Jonathan Papelbon in their first interleague (oh no) series of 2012.
Posted by The Omnipotent Q at 10:48 AM