Nice and Easy On Mom's Day

It was a nice Mother's Day for the Red Sox on Sunday, as they strolled to a nice, easy 12-1 win over the Indians to take 3 of 4 in the weekend series.

Daniel Bard had some early trouble, as he walked in a run with the bases loaded, but got Travis hafner to bang into a double play to keep the game at 4-1. 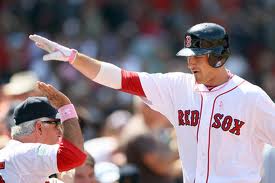 The Sox scored four in the first off former Sox hurler Justin Masterson, and were on their way. Big day for Will Middlebrooks (pictured), who hit his fourth home run, Daniel Nava hit two doubles and had three RBI, Adrian Gonzalez had two doubles, Jarrod Saltalamacchia hit a home run with 5 RBI and Dustin Pedroia extended his hitting streak to 14 games. They capped off the day with six runs in the 7th to put the game away at 12-1.

That makes it three straight for the Red Sox, and they conclude this homestand with two with the Seattle Mariners beginning tonight.

And for all the bad pub the Red Sox and their owners have gotten lately, they did something really classy in replacing Derek Lowe's stolen 2004 World Series ring.
Posted by The Omnipotent Q at 11:35 AM