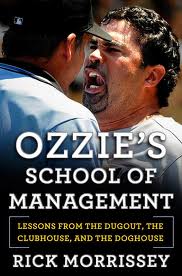 I recently completed reading a new book that was just released about one of baseball's most colorful characters: Ozzie Guillen.

It's called "Ozzie's School of Management: Lessons From the Dugout, the Clubhouse and the Doghouse" by Chicago Sun-Times sports columnist Rick Morrissey.

It's an interesting look at one of MLB's most polarizing figures. Some people swear by Ozzie Guillen, other swear at him. But everyone has an opinion on him, and Morrissey takes at look at the man himself, with his final season, 2011, as the White Sox' skipper as background.

You could also call the book "Ozzie's Ten Commandments of Managing." It has chapters entitled "Get Rid of Clutter In Their Heads", "Don't Confuse Team and Family", and "Protect Your Employees from the Barbarians." The book is filled with tons of Ozzie quotes, and his very colorful use of the English language. (And there are a ton of f-bombs in this tome.)

Morrissey does not write a standard biography, but does jump around Ozzie's life in the game, especially his early life in the game since coming over from Venezuela in 1981. He hits on all of the highlights (and lowlights), like his leading the White Sox to their first title since 1917, how he nailed down the job in the first place, his running feud with Chicago GM Kenny Williams, his Twitter wars and the fierce loyalty he had with struggling players like Adam Dunn.

Ozzie's a complicated character, but you feel you get to him a bit better with this book. He comes from an impoverished background in Venezuela, but never forgets his roots.

I wouldn't say it's the best baseball book to come down the pike, but it's not a bad effort from first-time author Morrissey. The book comes to a conclusion when Ozzie was traded to the Marlins last September. But after the events of this past April Morrissey did hit the nail on the head with this prediction near the end of the book: "A person or group will feel insulted by something Guillen says. The mayor of Miami. Marine biologists. Cuban Americans. Somebody."

Never a dull moment in Ozzieland. If you're a White Sox fan, you'll probably enjoy "Ozzie's School of Management."
Posted by The Omnipotent Q at 11:21 AM