One Game Above Mediocrity. Finally. 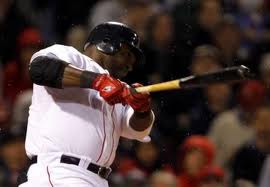 Daniel Nava had a crucial bases-clearing double in the third inning off Justin Verlander, and Daniel Bard went 5 1/3 innings, allowing just two earned runs, both solo home runs. The Red Sox once again beat the slumping Tigers, 6-3. Verlander had his worst start of the year, giving up five runs in six innings.

The bullpen was again sharp, and David Ortiz blasted his 11th home run of the year, which put the game on ice in the 7th inning.

The Red Sox have still not decided the course of action with Dustin Pedroia. He has a torn adduction muscle in his right hand. It doesn't require surgery, but he maybe shut down for 3-4 weeks to let it heal. Playing through it may make it worse. It wasn't injured when he slid making that fine play on Danny Worth on Monday. He injured it a couple of weeks earlier swinging at a pitch. His numbers have declined since the injury.
Posted by The Omnipotent Q at 11:23 AM