OK, Make It Eight Out Of Ten 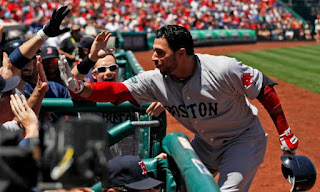 The Red Sox keep on rolling, and took the weekend series from the Phillies, 5-1, behind another sterling effort by Josh Beckett.

Mike Aviles (pictured) and Jarrod Saltalamacchia blasted home runs off losing pitcher Cliff Lee. Aviles' led off the game for the second straight game, and Salty's was of the three-run variety. Not bad for a guy who had gotten 12 stitches in his head just a couple of days earlier. Aviles has 8 homers on the year and Salty has 7.

Beckett went seven excellent innings before running out of gas in the 8th. Vicente Padilla pitched out of a bases loaded jam, and Alfredo Aceves pitched a perfect ninth.

And now all of a sudden, the Red Sox, at 20-21, trail fourth place New York by one game. (The Yankees would be in last right now if it hadn't been for that bullpen meltdown by the Red Sox last month.) They have won 8 of their last 10, and are 6 1/2 games behind Baltimore, and start a three-game series with the O's tonight at Camden Yards, with Clay Buchholz pitching for the Sox.
Posted by The Omnipotent Q at 11:15 AM