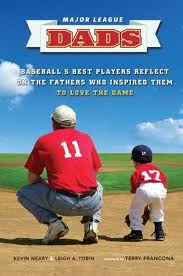 I just finished reading an interesting book about MLB players and the long road they take to get to the Promised Land, called: "Major League Dads: Baseball's Best Players Reflect On The Fathers Who Inspired Them To Love The Game."

This book is centered on the fathers who gave current players the love of the game they have. Over 100 current players, as well as recent ones who left the game were interviewed for the book, which was written by Kevin Neary and Leigh Tobin.

Each remembrance is just a page or two long, but they feature some of the game's greats, like Albert Pujols, Roy Halladay, Justin Verlander, David Wright, Joe Mauer and many others. They all speak about what their dads did for them as youngsters, encouraging them to have fun, respect the game, that sort of thing. The book also includes many of photos of the players from their earlier days of playing ball for fun. Each player's first MLB game is highlighted, and many players talk about their feelings that day and if their fathers were present for it.

(I did find one glaring mistake in the book. In the section on Jose Molina, the authors refer to Puerto Rico as a "soccer-crazy country." Well, Puerto Rico is not a country, it's a commonwealth, and it is not "soccer-crazy." Baseball is a far more popular sport on the island than soccer is.)

Terry Francona wrote the forward, and there is special section at the end that features actor James Earl Jones talking about his famous role in "Field of Dreams." I found that very interesting, in that he reveals that his character, Terrence Mann, was actually a ghost and was dead throughout the film. (I am a big fan of the film, but I must admit that I never would have guessed that, even after seeing it so many times.)

The book is available through Running Press, and is a very enjoyable read. Goes without saying it would make a nice gift for Father's Day!
Posted by The Omnipotent Q at 11:20 AM