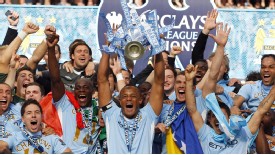 City was down 2-1 to Queens Park Rangers as the match headed into added on time. Manchester United, England's "Evil Empire", defeated Sunderland just moments earlier, 1-0, and was poised to grab the title.

But City wouldn't surrender. They scored two dramatic goals, one by Edin Dzeko and another by Sergio Aguero, and City had their first league title since 1968. Here's more from ESPN Soccernet.

After United's win, it looked like the celebrations at Sunderland would begin, and they would win their 20th title. But City pulled it out of the fire, and the long faces of the United fans was just priceless.

I've always compared Manchester City with the New York Mets, having to share a city with a behemoth that's won far more titles.

Congratulations to all Manchester City fans everywhere. The "Noisy Neighbours" have their title.
Posted by The Omnipotent Q at 1:07 PM