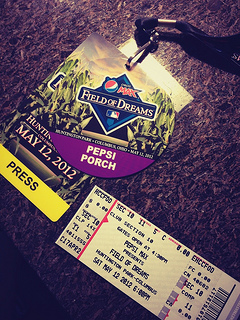 Last Saturday night, there was a special game played in Columbus, Ohio called "The Pepsi Max Field of Dreams Game."

It featured a team of Hall of Fame baseball legends pitted against a team constructed by a Pepsi Max contest winner named Tim Wisecup, who put his own squad together.

My friend Andrea had the pleasure of attending last Saturday's inaugural game, and sent along a number of great photos she took. Check them out here.