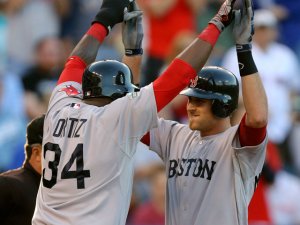 I was doing Trivia for a good part of last night's Red Sox game in Kansas City, but I couldn't miss the heroics of a possible star in the making: Will Middlebrooks.

I even added him to one of my fantasy teams last night.

Felix Doubront got the win last night, despite going 6 1/3 innings and allowing 5 runs. It gave the pen a well-deserved rest, and Vicente Padilla went the final 2 2/3 innings in getting his first save in the 11-5 Sox win.

David Ortiz continues to terrorize AL pitching, hitting another home run, two singles and he was walked intentionally twice as well. Dustin Pedroia was just a triple short of the cycle, and walked three times.

It was 7-5 Sox in the bottom of the seventh with one out and the bases loaded, and it looked like the bell was tolling. Bobby Valentine took out Doubront and brought in Padilla, who got Billy Butler to hit into a double play, and that was basically the ball game. The Sox added four in the eighth, including Middlebrooks' second home run of the night. He had 5 RBI in the game.

Daniel Bard takes the mound for Game 2 in Kansas City tonight.
Posted by The Omnipotent Q at 11:12 AM