It was a pretty incredible sports day yesterday: Jered Weaver pitched a no-hitter, three games ended in their final at-bat, the New York Rangers won their playoff game in triple overtime, the shocking and incredibly sad news about the death of Junior Seau, and the Will Middlebrooks Era in Boston began. 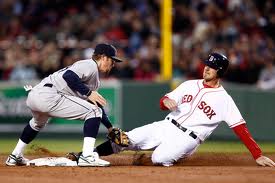 The third baseman of the future was called up as Kevin Youkilis hit the DL, and made quite an impression. He was tearing up AAA, and drew a walk in his at-bat last night, and promptly stole second (pictured). He completed his night with a single and double, going 2-for-3 and playing a flawless third base.

It was also the first game in a Sox uniform for pitcher Clayton Mortensen, and he also left a favorable impression. He was acquired for Marco Scutaro over the winter, and pitched the last three innings, allowing a single, and then struck out six of the last nine hitters he faced.

The offense unfortunately, was ice cold in the clutch last night, going 1-for-14 with runners in scoring position. Oakland, one of MLB's worst offenses, won it 4-2, and the Sox scored a run in the ninth and had the tying run at the plate before Adrian Gonzalez, in an 0-for-17 slump, grounded out to third to end it.

Daniel Bard gave up four runs in 5 1/3 innings and got saddled with the loss.

BTW, I did like those throwback uniforms both teams wore last night, which were from 1936. I especially liked the high, "barber pole"-like socks. I wish more players would get rid of that "pajama bottom" look of the pants and go back to high socks and stirrups.

The Sox have Thursday off before the Orioles come to town Friday for a three game series. Jon Lester pitches Friday, and Aaron Cook will make his Sox debut Saturday. Josh Beckett will skip his turn, but the Red Sox insist he will be back in the rotation to make his next scheduled start next week.

NESN also said today that Jerry Remy will miss at least a week from the booth with a sinus infection, and will be replaced temporarily with Dennis Eckersley and Peter Gammons. Get well soon, RemDawg!
Posted by The Omnipotent Q at 11:18 AM