Birther Big Mouth Gets His Comeuppance 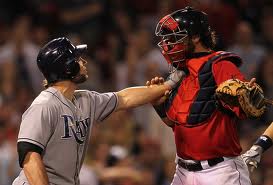 Last night reminded me of the Lester of 2006, who nibbled around the plate and threw a ton of pitches (there were some close ones, but I really can't blame the home plate ump), and got burned in the end. He served one up to Joyce down the middle of the plate in the third, and it was the beginning of the end.

The bullpen was stellar (5 shutout innings last night), and rolling along until Luke Scott came up to bat against Franklin Morales with 2 outs in the 9th. The first pitch was behind him, and I think everyone knew what that meant. But on 3 and 1, Morales hit Scott in the knee, and he started towards the mound, and both benches emptied.

No punches were thrown, but it seemed like the coaches on both teams were fired up more, especially the Sox' Tim Bogar and Bob McClure. No one was ejected (interesting that Morales wasn't) and the game continued without incident.

This really goes back to last week in Tampa, when Adrian Gonzalez got hit, and the Sox retaliated later in that game for that.You would think that would have been the end of it, then Dustin Pedroia got hit in the back in the 6th. At the time, I didn't think much of it, as it brought up David Ortiz as the tying run (he flied out). But ultimately, it comes back to the Birther Big Mouth.

Scott is not one of baseball's quiet guys. He never knows when to shut up, and made news over the winter with his comments about the Red Sox and their fans, and later called Fenway "a dump." And this is a guy who still thinks President Obama wasn't born in Hawaii. (One of those loony "birthers." I compare those wackos to the equally screwball "9/11 Truthers." But, this is America. Believe whatever you want to believe.)

Joe Maddon called the Red Sox "cowardly" after the game, and even promised some retaliation.

Bobby Valentine said it was "the ghosts of Fenway" who hit Scott in the leg in the ninth.

Be careful what you say about Fenway, Birther Boy. Karma has a funny way of getting even.
Posted by The Omnipotent Q at 11:25 AM