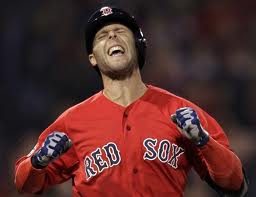 Another frustrating night at Fenway for the Red Sox, as they dropped a 13-inning game to Baltimore, 6-4.

They've dropped four of the last five, and seem to have a lot of trouble winning at home, now having dropped eight of the last nine at the Fens.

Jon Lester had two leads given to him by the Red Sox, but gave them right back.

Alfredo Aceves was devastating in relief, and struck out the side in the 10th and 11th innings. With the exception of Clayton Mortensen, the entire bullpen was used. Ugh.

Many opportunities to score more runs went wasted. It is frustrating as hell watching this bunch. They look like world beaters on the road last week and come home and can't beat teams inferior to themselves.

The best part of last night? Hearing Dennis Eckersley in the booth, substituting for Jerry Remy (who should be back May 10th). Love the "Eckisms" like "mediocre salad down Broadway." (That translation would be a pitch thrown down the middle of the plate.)

Have you noticed many empty seats on this homestand? Granted the weather hasn't been great, but the Boston Globe has an article about how "the Red Sox have redefined sellout."

Settle in folks. Something tells me this will be one long frustrating season.
Posted by The Omnipotent Q at 11:23 AM