My Kingdom For An Easy Win

It had all the feeling of a game the Red Sox would let get away, but it didn't happen, and Clay Buchholz did not give up at least five earned runs. It was a trial to watch but the Sox prevailed, 7-5. 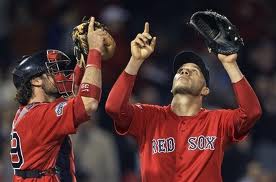 At the start it looked like he would. Buchholz gave up a run to the Indians and they had the bases loaded, but he got out of it. The Sox answered back with two runs in the bottom of the first on a Will Middlebrooks bases loaded double, and added two more in the second, on a Dustin Pedroia bases loaded double.

Buchholz, to his credit settled in, and went 6 1/3 innings, allowing just one run. It was 7-1 (the Sox added three more in the 5th), and the Tribe loaded the bases, and the night was over for Buchholz. The Indians scored three runs, as Rich Hill walked in a run and Middlebrooks made an error at third.

The rest of the game had all the feeling of being in a dentist chair. The Indians threatened in the eighth but didn't score, and they scored one in the ninth and had the tying runs on second and third against a shaky Alfredo Aceves. Johnny Damon flied out to center for the final out to get the Red Sox their first home win in seven games.

It was arguably the most important start of Buchholz' career, and he pitched well. The Sox are now 13-19, and Felix Doubront takes the mound tonight against the Indians.
Posted by The Omnipotent Q at 11:15 AM