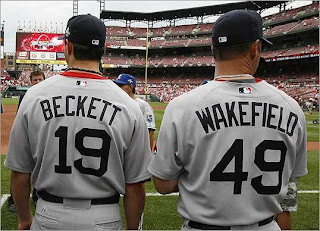 The Red Sox will be honoring Tim Wakefield with a night to remember one of the classiest men ever to wear a Red Sox uniform this coming Tuesday night. It is well-deserved, and I would hope that number 49 will go into the pantheon of numbers the club has retired.

It will surely take away for a short time what has been transpiring on the field this season, the abject disaster that is 2012. And the poster boy for it all is Josh Beckett.

Last night, he turned yet another stinker, and brought back horrible memories of last September. He got as many outs as runs he surrendered: seven. The Sox lost, 8-3. He was rightly lustily booed coming off the mound in the third inning. Red Sox fans were basically giving Beckett the collective middle finger. And after the game, Beckett gave it right back.

(And BTW, did anyone else notice the plethora of empty seats at Fenway last night, and the guy with the bag over his head in the second row? They may both become common sights at the ballyard this year.)

He was simply clueless and defiant in the post-game press conference, as reporters asked him about his playing golf with Clay Buchholz last week while his turn was being skipped in favor of Aaron Cook because of tightness in his lat muscle.

He talked about getting "18 off-days a year." He gets far more than that being a pitcher. Beckett was OK swinging a golf club last week, but wasn't available for an inning or two in last Sunday's 17-inning game, the one the Sox had to throw away because they had to use a position player at the end?

Beckett just doesn't seem to give a damn about the Red Sox, the fans, or anything else that doesn't revolve around him. I thought after last year's disastrous ending, he was a big part of the problem and had to go. But the injury to John Lackey derailed anything like that from happening.

He's the worst of the "clubhouse lawyers" on this team, and a divorce between him and the Red Sox now seems to be inevitable. The Sox are on the hook to Beckett until 2014, with an average annual salary of $17 million. They will have to eat plenty of money to move him, but now what is the alternative?

And when is Beckett next scheduled to pitch? Next Tuesday night, when one of the great Red Sox players of all time will be honored. It will be a night of stark contrasts.

Wake did everything that was ever asked of him as a Red Sox pitcher. He will be honored for that, and rightly so.

Beckett? He has defiantly destroyed his legacy in Boston. Bring on the divorce.
Posted by The Omnipotent Q at 11:14 AM