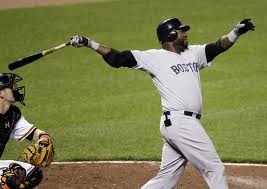 Clay Buchholz looked sharp the first two innings, but the wheels came off in the 3rd, as he walked in two runs, and allowed four for the inning.

The Sox were down 5-2 when they came back, beginning with a mammoth home run that David Ortiz hit on to Eutaw Street. The Sox added two more on a sac fly by Daniel Nava and a balk by Tommy Hunter.

The Red Sox went ahead to stay in the seventh, on a sac fly by Adrian Gonzalez and an RBI single by Will Middlebrooks.

The bullpen did another fine job, allowing just one earned run after Buchholz left, in 3 2/3 innings. Alfredo Aceves got his 10th save of the year getting Baltimore 1-2-3 in the ninth.

And the win ties the Red Sox, at 21-21, with the fading Yankees, for fourth place. New York lost to Kansas City last night, and the Red Sox are now 5 1/2 games out of first place.

The Sox received some unsettling news about Cody Ross, as he is heading for the DL, as he has a small bone broken in his foot from a pitch he fouled off in Philadelphia on Friday night. It may keep him out 6-8 weeks.

And even more about Ryan Sweeney, as he may be put on the 7-day DL for concussions, as he didn't pass a test last night. He was injured Saturday making that terrific sliding catch against the Phillies.

Last night's starting outfield was Daniel Nava (that's "Nah-va", not "Nay-va," Gary Thorne), Marlon Byrd and Che-Hsuan Lin, three guys who were not on the Red Sox Opening Day roster. If both Ross and Sweeney go on the DL, that will make seven Red Sox outfielders on the DL now. Bloody hell.

The Red Sox recalled Scott Podsednik, the 2005 White Sox World Series hero, today from Pawtucket. He was hitting .323 in his brief stint there.

Kevin Youkilis is about to come off the DL, and now the question of sending Will Middlebrooks back to Pawtucket becomes a little more cloudy. Can Adrian Gonzalez play RF a little more often, and Youk can play first? That question should be answered shortly.
Posted by The Omnipotent Q at 11:07 AM