The Worst Call I've Ever Seen 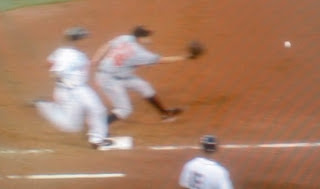 The Baltimore Orioles came into Fenway Park on a five-game losing streak, and the Red Sox swept the Minnesota Twins earlier this week. So naturally the Orioles won, 7-3 last night.

Clay Buchholz made his first start coming back from Pawtucket, and was shaky from the start, allowing a double to Brian Roberts to open the game. Baltimore went on to score two runs in the inning, as Buchholz walked three. He then settled down and pitched three solid innings before allowing the Orioles two more runs in the fifth. Buchholz struggled to get through the inning. He threw 104 pitches, allowed four runs and walked five.

But this game will be remembered for what I think is simply the worst call I've ever seen an umpire make at first base. In the second, Julio Lugo hit a line shot off Kevin Millar's glove at first. It allowed a run to score while Millar flipped the ball to pitcher Brian Burres at first. Lugo had already crossed the bag when the ball finally arrived to Burres. (The above photo is courtesy of The Joy of Sox.) Doug Eddings called him out, and I honestly wonder what the hell this lunkhead was actually watching. Lugo and Terry Francona were pretty angry, but nobody was tossed. I hope Eddings at least has the decency to come out and admit he blew this call and especially WHY he called Lugo out. (Next batter Jacoby Ellsbury grounded back to the mound, so that might have been a DP anyway.)

The umpiring in MLB just continues to be as horrible as I've ever seen it.

Baltimore put the game away in the 8th, as Manny Delcarmen allowed two runs to put it on ice. The Sox lost no ground, as Tampa Bay lost in Cleveland, and the Yankees behind them (I love writing that) gained nothing as they lost in Toronto. Lugo left the game after reaching first in the ninth, as he injured his quad, and maybe heading for the DL. Jed Lowrie maybe heading back to replace him should a DL stint happen.
Posted by The Omnipotent Q at 11:53 AM