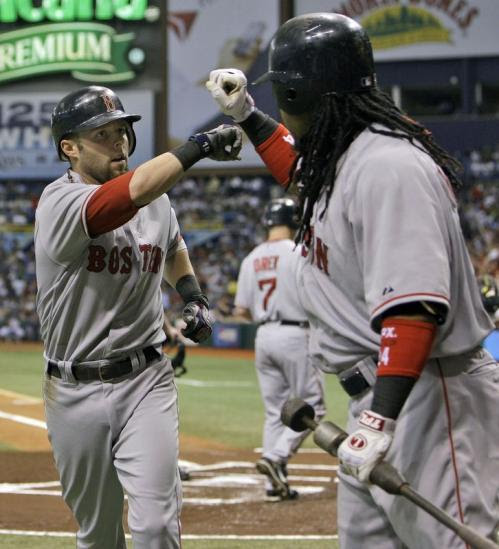 Things were looking up last night. Daisuke Matsuzaka and Hideki Okajima combined for six solid innings against Tampa Bay last night, allowing just one run on four hits. (Although Dice-K struggled to go five, thus putting more pressure on the bullpen.) Dustin Pedroia was having the night of his life, hitting a home run, triple and double in his first three at-bats, and scored all three times. Scott Kazmir, the so-called Red Sox killer, struggled through four innings. It looked like the four-game losing streak was coming to an end, and it was 4-1 by the seventh inning stretch.

Then the bottom of the seventh came along, and everything changed.

Manny Delcarmen came in and had nothing. Craig Hansen then came in and couldn't the ball over the plate. David Aardsma got one out and intentionally walked the next batter. Javier Lopez got a strikeout, then gave up a two-run single to end the scoring for Tampa Bay.

For the second time in four games, the bullpen has blown a three-run lead in the seventh inning, and it also ended with the Red Sox losing by one, 7-6. Theo Epstein's number one priority right now for the upcoming trade deadline had better be some more bullpen help. With this crew, the Red Sox won't make it to the postseason. Jonathan Papelbon, who seems to be the only reliable member out there, can't pitch every day.

The pen weren't the only culprits last night. The Red Sox wasted opportunities last night, left a man on third with less than two outs, Julio Lugo made a stupid baserunning blunder by going out of the baseline to break up a DP (when Jacoby Ellsbury had the play at first easily beat) and it cost the Sox a run. Playing hit-and-run with Mike Lowell and Jason Varitek in the ninth wasn't very wise (Lowell got thrown out stealing easily as Tek swung and missed), and Tek looks totally overmatched at the plate right now.

All and all, it was a simply awful night for the Sox last night, as they got swept for the second straight time in Tampa, and fell 3 1/2 games back.

Perfect time for a slump, as they begin a four-game series in New York tonight. I'm hopeful for a split of the series, but I fear the worst.

Prove me wrong, guys.
Posted by The Omnipotent Q at 12:18 PM

I was thinking The Sox had inherited the karma of last year's Tampa "Rally Pen."

These are not your baby brother's Devil Rays.

Who thought the Rays would be this good? Raise your hands....I didn't.

I certainly didn't (my hands aren't in the air...they are typing on my keyboard).