First at the Break 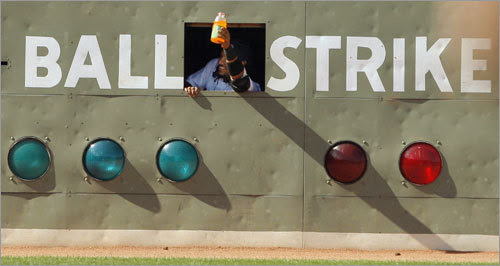 The Red Sox are once again back in first place, and just in the nick of time as the All-Star break commences. The Tampa Bay Rays dropped their seventh straight game and were swept this weekend in Cleveland, 5-2, and the Sox held on yesterday, 2-1. They finish the first half, 57-40, with the third-best record in baseball (behind the Cubs and Angels).

Daisuke Matsuzaka pitched six innings yesterday in getting his 10th win. He walked five, and got out of a bases loaded, one out situation in the fifth. He has now gotten into 11 bases loaded situations this season, and has allowed just one run to score (on a walk). He certainly loves to walk the tightrope.

And speaking of walking tightropes, Jonathan Papelbon did just that, giving up a run on three hits in the ninth to the Orioles, but Melvin Mora popped up to second with the tying run on third to give the Red Sox the win, and Pap his 27th save.

The Red Sox left runners everywhere yesterday, including the bases loaded twice, and it looked like it would come back to haunt them, but the two runs they scored was just enough. (Pictured is Manny Ramirez during a 7th inning pitching change in his favorite place, inside the Green Monster, enjoying some Gatorade.)

Seven players, along with Terry Francona and his staff, now move on to New York for tomorrow night's All-Star Game. It will be something else to see the Red Sox dominating the game, especially with Tito managing the game in that joint they are tearing town after this season.
Posted by The Omnipotent Q at 10:30 AM