A Strange But Satisfying Fourth 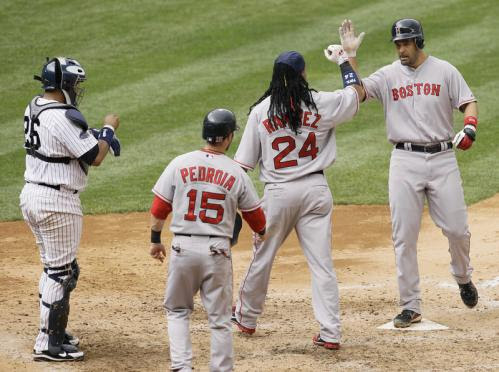 It was one helluva bizarre game played on our nation's birthday in the Bronx yesterday.

The Red Sox won the second straight game over New York, 6-4. It featured one of the weirdest plays you'll ever see. Johnny Damon slammed into the wall on a drive hit by Kevin Youkilis in the third, but Judas couldn't hold it, and the ball landed on the wall, and after a second or two it fell on the warning track, scoring two runs and tying the score. But Judas hurt his shoulder, and could land on the DL.

It was the game's turning point, as the Yankees had a 3-0 lead in the first, but the Red Sox answered back in the third inning to tie it, and in the sixth when Mike Lowell blasted a three-run homer to left for the eventual difference. There was an 88-minute rain delay, and after that it remained 6-3 until two outs in the ninth, when Derek Jeter hit a ball that Coco Crisp caught to end the game. But third base ump Wally Bell, who clearly needs a seeing eye dog, ruled it no catch and the game continued. (Even the Yankee shills in the YES booth said it was caught.) Just another reason to bring in instant replay.

To say that I was boiling mad at that point is an understatement. These are the BS calls the Yankees always seemed to get, and usually trouble followed. But those days are long gone, as Bobby Abreu flied out to Coco in center to end it, and the Sox had a 6-4 victory. (Although Jonathan Papelbon's ERA should not have gone up with that absymal call.)

The loss put the Yankees in fourth place for the first time since 1992, six games behind the Red Sox and nine behind Tampa Bay. A big win for the Red Sox, as they are at least guaranteed a split in this four-game series.
Posted by The Omnipotent Q at 10:39 AM