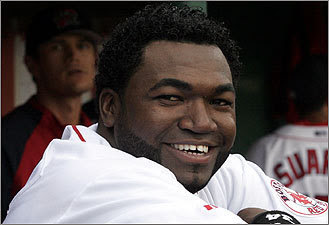 David Ortiz returns to the Red Sox lineup tonight for the first time since his wrist injury of May 31. He was gone for 54 days, and the Boston Globe has an interesting breakdown of the Red Sox offensive numbers since he left. Believe it or not, the numbers actually improved:

It goes to show that the Sox are such a deep team that they didn't miss a beat without having Papi. But his presence back in the lineup should be very welcome and hopefully rejuvenate those players currently struggling. And no better time than to have him return tonight.

And hopefully Manny Ramirez is good to go too. We shall see.

I am so ready for game one of three...Papi, bottom of the first, the crowd standing as one...PRICELESS. Have a great weekend, my friend! Peter

You have a great weekend too, Peter!