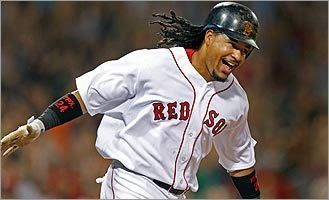 As I was doing Trivia last night, the Minnesota Twins had a 4-2 lead in the top of the eighth, and added another insurance run in the inning to make it 5-2. With the Red Sox offense looking AWOL yet again, it looked like a comeback was not in the cards.

Well, how wrong I was.

The Sox quickly scored a run in the bottom of the eighth, and Manny Ramirez came up with a man on. Manny had looked really sluggish as of late, but you knew he had to break out in a clutch situation. And he picked last night to do it, as he hit a rather high pitch from Matt Guerrier and it just soared into the Monster seats to tie the game. Kevin Youkilis then doubled, moved to third on a wild pitch, and scored on Brandon Moss' single up the middle.

Jonathan Papelbon came on and gave up a leadoff double, but a sacrifice, a strike out and ground out sealed a great Red Sox comeback win, and got Pap his 27th save of the season.

Jon Lester looked sharp for the first three innings, but the Sox couldn't turn a DP to end the fourth, and Minnesota capitalized by scoring three runs off him. He went 7 1/3 innings, allowing five runs on nine hits.

It's wins like last night's that takes away the sting of losses like last Saturday and Sunday. Josh Beckett goes for the sweep of the Twins this afternoon against Livan Hernandez.
Posted by The Omnipotent Q at 11:04 AM