All the News Was Good 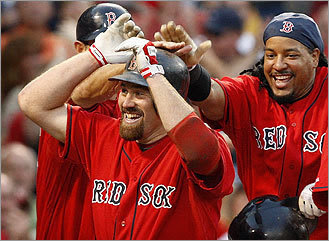 After a frustrating loss to the Orioles on Friday night, it was nothing but good news for the Red Sox on Saturday night.

Kevin Youkilis hit a grand slam and drove in six runs in the Red Sox 12-1 win over the Orioles. (Could have used that salami in the ninth inning on Friday night, Youk. But he's been raking the ball lately.)

J.D. Drew missed the last two games, but in his first at-bat back on Staurday, he hit an opposite field home run.

Manny Ramirez belted his 18th home run of the season, his 508th all-time, on the very next pitch after Drew's home run.

Julio Lugo will be out 4-6 weeks with a torn quad muscle after legging out a hit with two outs in the ninth inning on Friday. Jed Lowrie was immediately called up and played in last night's game. Here's the opportunity for Lowrie to shine. (I don't take pleasure in Lugo's injury, but it might be best for the club for him to sit for a while.)

Tim Wakefield was simply outstanding yet again last night, and the Red Sox finally gave him some runs to work with. He went seven innings, allowed just one run on two hits (a homer by Ramon Hernandez) and retired the last 13 batters he saw. I'll never understand those Sox fans who don't appreciate everything Wake does. He's a great innings eater, and he's been on an incredible roll lately. He's 3-3 in his last eight starts, but every one has been a quality one.

And the Red Sox announced that David Ortiz will begin a three-game stint at Pawtucket starting Thursday night, and then will go to Portland for another three-game series. The Red Sox hope Big Papi will be ready for the next Red Sox homestand, which just happens to be July 25 against the Yankees.

I love a night when all the news is good.
Posted by The Omnipotent Q at 11:02 AM