Papi's On the Way Back 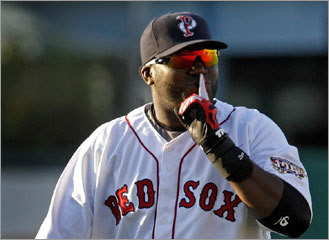 David Ortiz began his injury rehab at Pawtucket on Thursday night, and it was a certifiable success. Papi went 1-for-3 with a home run and a walk in the PawSox' 15-6 win at home against the Toledo Mud Hens.

Papi homered in his second at-bat on the night before a sellout crowd at McCoy Stadium. He also popped out, lined out and walked in his four at-bats as the designated hitter.

Papi reported no problems with the wrist after the game. He'll have two more appearances with the PawSox before moving over to Portland to play three with the Sea Dogs, and then if everything goes according to plan, he'll return a week from tomorrow against the Yankees at Fenway.
Posted by The Omnipotent Q at 10:20 PM

Papi's tater was such GREAT NEWS! Hey John, have you heard the possible rumor that Barry Bonds and the Yankees are close to a signing? I wrote about it and included the full text of the story. Have a great weekend...so hot here, already!

Forget about Bonds going to New York, Peter. They just picked up Richie Sexson, so that tells me they have no interest in him. NO ONE wants to Bonds and the media circus he brings. It's not collusion, it's common sense.

Even the Yankees know that.

Have a great weekend, Peter.