Lester to the Rescue Again 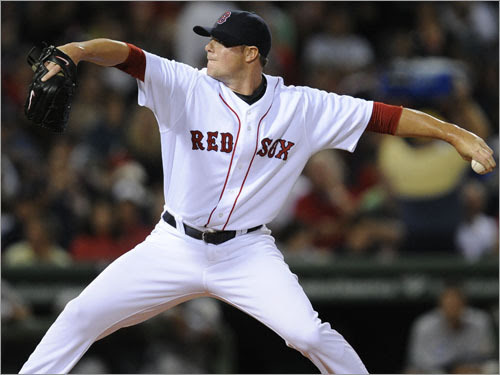 Lester had only one shaky inning, the fifth, when the Yankees got two runs to cut the Sox lead to 7-2, and had the bases loaded with no outs. But Slappy (aka Mr. Clutch) lined out, and Lester got the last two batters without any other runs scoring. That was basically it, as New York got only one more base runner the rest of the night as the Red Sox got a much needed win to cut Tampa Bay's lead in the East to one game.

David Ortiz hit a two-run shot for his first homer since his return, and Jacoby Ellsbury busted out of his slump, going 3-for-4 with a stolen base. Mike Lowell had a two-run single, and the bottom of the order (Varitek, Cora and Ellsbury) had a superb night, going 6-for-12 with 3 doubles and an RBI. And Manny Ramirez had two doubles and an RBI single to pace the attack. Lester allowed nine hits but went on to his ninth win against three losses.

Ramirez made more news yesterday by saying he'd be open to any deal should the Red Sox put one together to move him. He can veto any deal with his 10 and 5 status, but it sounds like he's ready to leave.

But trust me folks, the Red Sox aren't trading him by Thursday afternoon. His marriage to the Red Sox maybe crumbling, but it's not over yet.
Posted by The Omnipotent Q at 10:53 AM