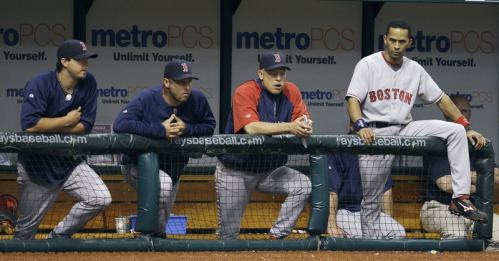 The Red Sox staged a late comeback with two runs in the 9th inning last night, as Brandon Moss got a "catwalk" RBI double, but it wasn't enough to overcome the Tampa Bay Rays, as the Sox went down 5-4 at St. Petersburg.

B.J. Upton hit Justin Masterson's first pitch of the night deep over the center field wall to put Tampa Bay ahead, and they extended it with a two-run shot by Gabe Gross. Masterson gave up three two-out walks that eventually scored and it cost him dearly.

J.D. Drew hit his 16th home run of the season and his 12th for June, and it is the third most ever by a Sox player in June, with only Jackie Jensen and Ted Williams hitting more.

Tampa Bay starter James Shields went 6+ innings in getting the win. He continued his home dominance, as his home ERA is about 2.00. He retired the first 10 hitters before Dustin Pedroia's infield single in the fourth.

Tampa Bay is now 1 1/2 games up on the Red Sox, and 6 1/2 up on the Yankees, who lost at home to the Rangers last night. Once again it appears this Rays team is not going away any time soon. Tim Wakefield goes for the Red Sox tonight against Matt Garza of Tampa Bay.

And oh yeah, Manny Ramirez apparently had a little difference of opinion with Red Sox traveling secretary Jack McCormick on Saturday over some tickets Manny wanted for a large group of friends and family for that night's game. Manny supposedly knocked the man to the ground, but later on apologized to him and it was accepted.
Posted by The Omnipotent Q at 11:05 AM

A key play was Lopez throwing an 0-2 fastball for a strike against Gomes, who was able to put the ball in play for an rbi fc. Lopez is weak against righthanders, doesn't have much velocity, and so really needs to expand the zone when he needs a K. Varitek gets a lot of credit for pitch calling, but that was a mistake.

You never know what you get with Lopez. Tito also likes him against lefties, but his numbers are better against righties. Lopez should have wasted one on 0-2. Little things like that can cost you big.