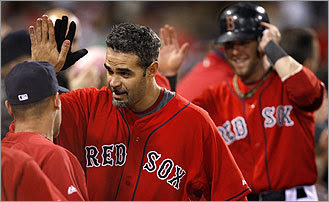 The second game of Saturday's day/night double dip at Fenway Park had to be one of the ugliest games of this baseball season. There were seven errors by both teams combined, and the last few innings were simply excruciating to watch. It was simply butt ugly. But it resulted in a Red Sox win and a sweep of the twinbill with the Milwaukee Brewers, 7-6, after the Sox took the opener, 5-2.

The Red Sox jumped out to a 5-0 lead in the second game, 5-0, as Mike Lowell (pictured) doubled in two runs and hit a two-run homer in his first two at-bats. Tim Wakefield looked good for the first five innings, but by the sixth he faltered, and it was turned over to David Aardsma. He continues to be a tightrope walker, as he allowed two runners on to score, via a hit, walk and hit batsmen. Aardsma continues to walk more than he strikes out, and inspires no confidence.

Craig Hansen then came in in the seventh and gave up three unearned runs. While he wasn't hammered, he struggled. The Red Sox committed two errors ( a questionable one on Alex Cora) that gave Milwaukee a 6-5 lead.

But they are one of the worst fielding teams in baseball, and they made two errors that led to two Red Sox runs in the seventh to put them back up, 7-6. Milwaukee threatened again in the eighth, as they had two on and one out, but a double play bailed out Javier Lopez, who seemed determined to give the game away.

And Terry Francona really rolled the dice in the ninth, keeping Jonathan Papelbon on the bench, as he pitched in Game 1 and got the save. (He threw just 7 pitches in getting it.) Tito went to Mike Timlin, who also threw just seven pitches in the ninth to seal the doubleheader sweep, 7-6. The bullpen was overall incredibly shaky, but the win was put away. (Tito, what a genius!)

And in something not unexpected, Gabe Kapler received a nice ovation upon his return to Fenway Park in the second game. Gabe's a true professional, and deserved to get a nice reaction from the Fenway faithful.

The first game was a lot neater, as Daisuke Matsuzaka improved his record to 7-0 and David Ortiz blasted a three-run home run in the second inning in leading the Sox to the win and stopping a four-game losing streak. After winning the second game, the Sox are now in a first-place tie with Tampa Bay for the AL East lead.
Posted by The Omnipotent Q at 12:46 AM

But, Eric Gagne' moved to the Brewer pen in the 4th Inning, earning the razzing of much of the Fenway Faithful:

A pinstriped bumper sticker, which came with the $2 Scorecard, reads "Gagne' Is a Yankee Spy";

After last season, and Gagne's performance in Milwaukee, he is despised;

And, in the case of Jeff Suppan, his Soup was COLD, if the Papi Bomb was any indication, as I viewed from the Jordan's Furniture 3rd Base Standing Room Area;

An Associate of mine, was once in the Polo Grounds for Mets Games. Fenway, in part, brought back memories of the PG, whereas having viewed Ebbets Field Pictures, this is my Ebbets Field Experience;

Fenway Park-NOTHING Like it-a Perfect Combination of Aged and current.