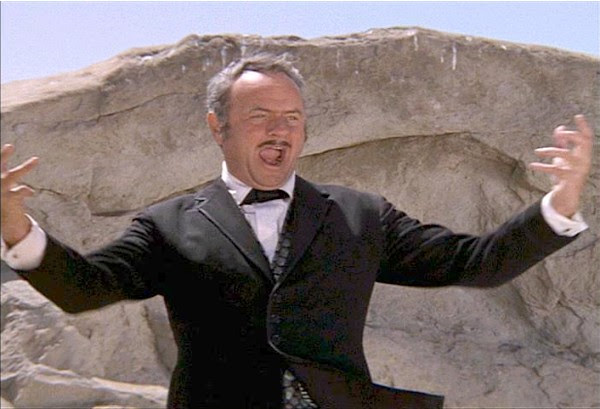 Today, an actor in one of my all-time favorite comedies died. Harvey Korman, who made his name on "The Carol Burnett Show" in the 1960s and 1970s, passed away in Los Angeles at the age of 81, after suffering from an aneurysm many months ago.

But he will be fondly remembered for his tremendous role as the evil Hedley Lamarr in the classic Mel Brooks comedy, "Blazing Saddles." It is one of the best comedy films of all time (in my humble opinion). Whenever anyone called him "Hedy Lamarr," he'd get indignant and exclaim, "No, that's Hedley!!" (The actress Hedy Lamarr actually sued Mel Brooks over the reference, and it was later settled out of court.)

One of my favorite Hedley lines from the film:
"You will be risking your lives, whilst I will be risking an almost-certain Academy Award nomination for the Best Supporting Actor. "

I certainly thought Harvey Korman deserved to win a Supporting Actor award for "Blazing Saddles," but it was not to be. But Mr. Korman did win four Emmy Awards for his work on "The Carol Burnett Show," as well as a Golden Globe.

I honor Mr. Korman's memory with one of my favorite scenes in "Blazing Saddles," when Hedley tells Taggart (Slim Pickens) he wants a large group of ruffians to attack the town of Rock Ridge. Here it is on YouTube. Thanks for the funny memories, Mr. Korman.

Posted by The Omnipotent Q at 9:23 PM

Easily one of the funniest movies ever made. It rewards multiple viewings. "Blazing Saddles" could never be made today. But its political incorrectness is what made it so great.

The writing was razor sharp and the timing sublime.

Like right after the quote in the masthead the next line? "could you repeat that?" Wonderful punchline.

The campfire scene-which is pure Richard Pryor, a co-writer by the way.

Mongo doing a one punch knockout of a horse and rider. Still my favorite gag ever!

This movie is an all time classic.

I never get tired of "Blazing Saddles," Steel. And the campfire scene alone is worth the price of admission.

Probably my favorite comedy, as well.

I had the great pleasure of seeing Mr. Korman perform with Tim Conway, in Las Vegas, about three years ago.