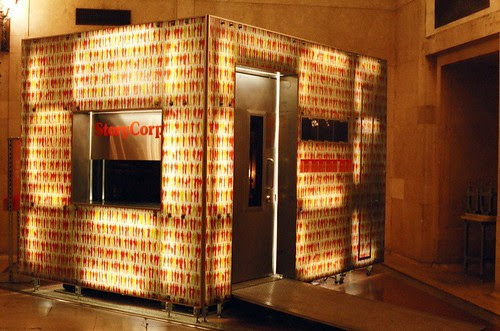 Today I had the pleasure of attending a small ceremony in Grand Central Station for the closing of the booth run by StoryCorps, which had been there since 2003. It will officially close on Saturday.

StoryCorps is the group that records the stories of average people, and has been collecting them since their first booth opened five years ago. They have recorded the stories of over 5300 people at that location, including myself in 2005. The legendary writer Studs Terkel cut the ribbon that opened the booth in October 2003. (And Mr. Terkel turns 96 this month.)

I recorded a fond remembrance for my friend Joyce there, and it was a very special hour I'll never forget. There were some funny memories, as well as a few that brought a tear to my eye. I found out about StoryCorps through the WTC support group I belong to. They have encouraged many people who suffered a terrible loss on September 11, 2001 to come in and record a CD for them. (Every person who does gets a copy of the CD as well as it being sent to the Library of Congress in Washington DC and also to the National September 11 Memorial and Museum, where it will be stored forever so future generations can hear their words.) They have recorded stories from over 200 victims' family and friends.

StoryCorps is led by Dave Isay, and he has done some remarkable work in getting the stories of just regular people at the StoryCorps booths. And today, the original location was bid a fond farewell with a short 20 minute ceremony, and then alumni like myself were interviewed for their memories of the booth for a CD that will also be sent to the Library of Congress.

I am very proud to support StoryCorps, and I encourage you to check out the booth they now have in Lower Manhattan, at Foley Square. You can record a fond remembrance of a loved one, or of someone who is here now. The hour I spent with them was incredible, and the faciliator who interviewed me could not have been more sensitive and respectful. The new location is on Centre Street between Duane and Worth Streets, across from the US Courthouse.

If you'd like to know more, just click here for more information, at the StoryCorps web site.
Posted by The Omnipotent Q at 6:32 PM

I'm sorry I didn't get to meet you at the shindig. So did you rough up the guy with the signed Yankees ball?;-)

Is there a link to your interview about your friend Joyce? I'd be interested in listening to it.

Dave was such a genius to come up with the idea for StoryCorps. It's a much needed antidote to an overly Britnified, Brangelinaed world.

I actually found that gentleman with the Yankees ball interesting. I first saw him at the book signing Dave did last year. I'm a student of baseball history, and I'd bet that ball is worth quite a bit. But probably more to that man in sentimental value, of course.

Sorry, Sarah, there is no link to the CD I made about my friend. But I am so proud that years and years from now, people can listen to what I said both at the Library of Congress and at the 9/11 Museum at the WTC.

I'm sorry we didn't get a chance to meet also, Sarah. But I am glad you stopped off here and read my post about StoryCorps. Dave and his staff will have my everlasting thanks for all the great work they do.