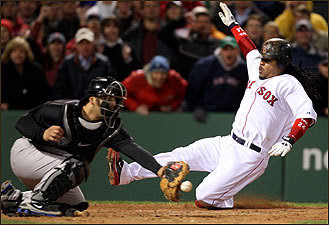 The Red Sox pulled off another ninth inning win last night, after another incredible pitchers duel, winning 2-1 for the second straight night over the Toronto Blue Jays.

Jason Varitek singled in Manny Ramirez (pictured), just one play after Brandon Moss' singled and Jed Lowrie was gunned down at home by a strong throw from center by Vernon Wells. Just before Tek's single, I was thinking to myself "They couldn't have two men thrown out at home in the same inning." And as I saw the throw coming home from Wells, I yelled at the screen, "Burn, Manny, burn!" And Manny made it by a nose, and Professor Thom's erupted in delight.

It was unfortunate that Daisuke Matsuzaka, who pitched 7 terrific innings and left with a 1-0 lead, didn't get the W, as the bullpen let the Sox down again, as Toronto tied the score on a scarfice fly. It was the fourth straight game the Red Sox got a game from a starter whow ent at least 7 innings and allowed two earned runs or less. Jonathan Papelbon pitched the ninth and got his second straight win.

It was an interesting night in the bar last night, as comedian Steven Wright, a longtime Red Sox fanatic, had a seat at the end of the bar and took in the game. There was also a large contingent of Celtics fans, who came in for the playoff game against Atlanta. Many were surprised that the Celtics game wasn't on the big screens or the sound of the Red Sox game was still on. There wasn't any problem, as a large group of Celtics faithful gathered around two of the TVs in the back to root on their heroes.

Thom's has a pecking order as far as the main TVs and large screen and which team gets it:
1. Red Sox
2. Everybody else

Once the Red Sox victory was completed, the Celtics game took charge. And that ended the night for me.
Posted by The Omnipotent Q at 12:17 PM