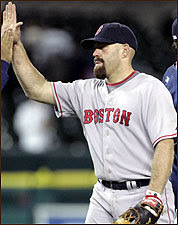 Lots to enjoy about last night's Red Sox win in the finale at Comerica.

Kevin Youkilis is about the hottest hitter on Planet Earth right now, and he connected for another two-run shot last night, and his fourth homer in the four-game series. He and Mike Lowell both had big series in Detroit. David Ortiz, despite the knee that still sore, looks like he's out of the early season funk, hit two homers in this series. Youk is now tied with Big Papi and Manny Ramirez for the club lead in home runs with 7.

Josh Beckett got his career strikeout number 1000 last night, and eight in total last night. He scattered six hits in seven innings in getting his fourth win of the year. Encouraging work from the bullpen last night, as Terry Francona did not need to use Jonathan Papelbon or Hideki Okajima. Craig Hansen pitched a 1-2-3 eighth, and may very well be suited to be just a one-inning pitcher. (The times he's run into trouble this season has always been when he comes back for a second.) Manny Delcarmen, who's been struggling mightly this season, allowed just a single in closing out the 5-1 win. The Red Sox have now won eight of their last ten games.

This could easily have been a four-game sweep, but taking 3 of 4 in Detroit is quite a good thing. The Red Sox now move on to Minnesota for another four-game series with the Twins. Jon Lester takes the mound tonight against the Boofster and the Central-leading Twins.
Posted by The Omnipotent Q at 11:37 AM