A Sweep in Oakland 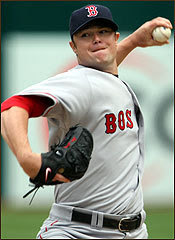 The Red Sox took both games in the short series in Oakland yesterday with a 5-0 win over the A's, and have started the year at 3-1, as they begin a three-game series in Toronto tomorrow night.

Jon Lester (pictured), had a fine outing, as he allowed no runs in 6 2/3 innings, allowing just three hits while striking out three. He showed better command than he did in Japan, although he walked three. The pitching was really solid in Oakland, as the Sox allowed just one run (a home run by Jack Cust) in 18 innings. David Ortiz finally got out of his early season doldrums with two hits and a two-run blast to right that gave the Red Sox the lead. At first it looked like a game the Sox were going to give away, as they left the bases loaded twice, and 10 men on in the first six innings. But Papi's homer proved the difference.

Jason Varitek has come alive in Oakland, and added a home run in the ninth. And Kevin Youkilis set the MLB record yesterday for consecutive errorless games by a first baseman, with his 194th consecutive game, breaking the mark set by Steve Garvey in 1985. Congratulations to Youk, the Sox' Gold Glove first baseman.
Posted by The Omnipotent Q at 11:37 AM