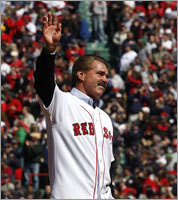 This article appeared at Bornintoit.com on Thursday, but I thought it was worth putting on my site as well.

Bill Buckner returned to Fenway Park on Tuesday for the Opening Day ceremonies, to throw out the first ball to his former teammate and Red Sox legend Dwight Evans. There were rumors that it was going to happen, but it remained a secret until the very last minute, when Joe Castiglione made the announcement.

It was truly a touching moment to see a man who was such a terrific all-around player get such a rousing ovation from the Fenway faithful. Buckner was genuinely touched by it, and had to brush away tears on a couple of occasions.

It was wonderful that the Red Sox owners made the offer to Buckner, and that he finally accepted after turning down offers in the past to return. But make no mistake about it, it's not the first time he's been warmly received by the fans at Fenway since that infamous error of 22 years ago.

On Opening Day of 1987, the fans reacted similarly when he was introduced in the pregame introductions. Back then, it was their way of saying they were behind him despite the fact the Red Sox didn't win the 1986 World Series, and it wasn't all his fault. The Sox eventually released him during the 1987 season, but he returned once again as a player in 1990 and got another thunderous ovation on Opening Day in 1990. Once again, Red Sox Nation was telling him and the world that they held no grudge with him.

But as the years went on, there was an incident involving Buckner and some fans over that infamous play that the media played up on, and they seemed to be coming to the conclusion that Red Sox fans in general were angry at Buckner and held him reponsible for the 1986 loss. I remember Buckner telling a story about how one writer contacted him and actually asked him if he contemplated suicide over the fact the Red Sox lost that World Series. (It was shortly after Donnie Moore's suicide, the pitcher who eventually took his own life after many things in his life went sour after Dave Henderson hit a home run off him in the 1986 ALDS, and eventually the Angels lost the series in 7 games. Moore had really serious problems in his life that had nothing to do with baseball.)

Eventually, Buckner got tired of the media hounding him over the error, and eventually left Massachusetts and resettled his family in Idaho. He simply wanted to live a life away from the endless questions over it. The media, such as outlets like ESPN and Fox, always seemed to bring up the error to further pour salt into the wounds of Red Sox fans, especially in games when the Sox took on the Yankees. (And they will never be fully forgiven by me for it.) Dan Shaughnessy has made a cottage industry over Buckner's error and every critical Red Sox loss with his book, "The Curse of the Bambino." (Granted, he's not the only one, but he is the poster boy for those who revel in it.) If you were to take of poll of Red Sox fans before the 2004 championship and asked them, "Who do you hate more, Bill Buckner or Dan Shaughnessy?", CHB would win that in walk, and I bet about 90% of the fans would have said Shaughnessy.

I have known very few Red Sox fans who ever cursed the name of Bill Buckner or held him personally responsible for the Red Sox not winning a World Series until 2004. I have always believed most of the idiotic nonsense over Buckner's error came from anti-Red Sox circles (such as jackass Yankees fans), and not from disgruntled Sox fans. I have always felt badly for the way Billy Buck was treated by the media, and the way his name became a national joke for futility. He was a gutsy ballplayer and borderline Hall of Famer, who had a terrific year in 1986 (102 RBI) and was a big part in the Sox getting to the World Series. The responsibility for the 1986 loss should also be shouldered by such people as John McNamara (who deserves most of the blame in my opinion), Roger Clemens, Calvin Schiraldi, Bob Stanley, and Rich Gedman. And of course, as far as Buckner goes, everyone seems to forget Game 6 was already tied when Buckner made the error, and that even if he fielded the ball cleanly, Mookie Wilson beats Bob Stanley to first (in my opinion, after seeing numerous camera angles of the play), as Stanley was late coming off the mound. And don't forget, the Red Sox still had shot to win the series in Game 7 two days later, but the Mets prevailed, 8-5. (And all these years later, NO ONE seems to give the Mets any credit for a spectacular comeback. It always seems to be "Buckner's error" that was the whole story. A real shame.)

Once again, it was nice to see Bill Buckner at Fenway Park this past Tuesday, and the outpouring of support he got from the fans. I also found it interesting that after the game in a press conference, Buckner said he didn't blame the fans for making his life difficult, but he had to make peace with the media.

The fans never needed to make peace with Buckner. (Winning two World Series eases the pain of that loss dramatically of course.) But it's good to see Billy Buck back with his old Red Sox number 6 on Tuesday. For years I was always said that if I ever bumped into him in a bar, I would buy him a drink and thank him for the memories.

If that day ever comes, the drinks are still on me, Billy.
Posted by The Omnipotent Q at 10:54 PM

There was only one thing that bothered me about Buckner. He would sign pictures of his error along with Mookie Wilson for money. Considering how devastating that moment was for a lot of young Sox fans at the time (like myself) that always irked me.

That said, I'm long past that now. It was great to see him back in Fenway.

I have to admit I wasn't crazy about Buckner doing that, but it was his way of dealing with the error (and of course, made him some money as well)...