I Have Terry Francona to Thank 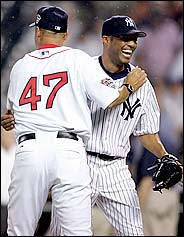 On Thursday afternoon I was an invited guest to the BLOHARDS meeting at the Yale Club in Manhattan, across from Grand Central Station. The BLOHARDS are the group of New York City-based Red Sox fans who have supported the team for over 40 years, and they have two meetings each year. I am also a member.
As I did last year, I did some trivia for the members, and this year I did some trivia questions I did at Professor Thom's during Trivia Night. I gave away prizes courtesy of the bar, namely two Thom's t-shirts and a $50 gift certificate to the bar. My pal Chris from Thom's also was there, and gave a cool speech about the bar that included an upcoming viewing of the documentary we appear in and an upcoming benefit for the former Sox pitcher Jerry Casale that will take place at Thom's in July.

Also featured during the meeting was Red Sox pitcher David Aardsma, who received a nice ovation from the 125 or so people in attendance. Then he went up to the mic stand and was interviewed by WFAN's Ed Randall. They talked about Aardsma's career, and it was interesting to hear that his sister is an actress who has appeared on a few TV shows. But when Randall brought up the fact Aardsma hit Alex Rodriguez the previous night on a 3-1 pitch, he received a standing ovation. David looked genuinely embarrassed by that attention. But he came off a rather personable guy.

I also had the pleasure of meeting Tina Cervasio, who also was an invited guest, and she also spoke with the members during the meeting. Tina was the Red Sox sideline reporter who has now moved over to the MSG Network in New York. She was very nice, and is quite an attractive woman as well. During the meeting, she told a very funny Manny Ramirez story (one of many I'm sure she has to tell) from last year's playoffs.

There was also a singer/actress named Christine Pedi who did a killer impersonation of Barbra Streisand singing "Take Me Out to the Ballgame." There was also the "Henry Berry Memorial Slide Show," which was a pictorial review of the Red Sox and baseball since last year. A really funny and comical moment was when "The Horse's Ass Award" was given out, to the individual who was the biggest jackass of the year. It's been won by such individuals as George Steinbrenner and Alex Rodriguez (the last two years for him). I thought it might go to Hankenstein this year, but it was given out, and rightly so, to the first person who ever once appeared at a BLOHARDS meeting (back in 1986): Roger Clemens.

Near the end of the festivities, there was another prize giveaway, for correctly answering some Red Sox trivia. One question was: "What number does Terry Francona wear?" There was some silence, as so few people have ever seen Tito without a pullover top or jacket on. But I yelled out: "47!" And I was correct, and I won two tickets to Fenway Park for next Thursday's game against the LA Angels.

Yep, I have Tito to thank, for all those few times Sox fans have ever seen him in his uniform top. (In the picture, it was Tito during the 2005 All-Star Game with Mariano Rivera. That was one of the only pictures of him I could find with him wearing his number.)

Once again, the luncheon with the BLOHARDS was a fun event, and my thanks to Joe Cosgriff, Ray Duffy and Frank Minishak of the club for staging such a great event, as I was so glad to be a part of it. The next BLOHARDS meeting will be on August 27, and I'll have the trivia raring to go then.
Posted by The Omnipotent Q at 6:58 PM