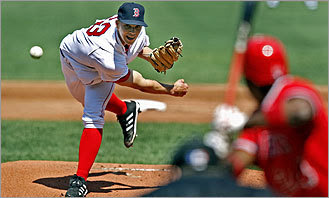 It was a brilliant day at Fenway Park on Thursday afternoon, with brilliant blue skies and warm temperatures. (I'll have more on the day in the next post.) The Red Sox have been bothered by the flu, which has gone through the clubhouse. Terry Francona made a wise decision by holding Tim Wakefield back so he can start in Tampa on Friday night. Wake owns the Rays in the dome, so the Sox were forced to bring up another starter from the minors, namely rookie Justin Masterson.

Masterson, who was drafted two years ago out of San Diego State, was mentioned prominently in Johan Santana trade talks this past winter, and is considered by some scouts to have a future in the majors as a number 3 starter. He's started this season at Portland in the Eastern League, and got the call for the finale against the LA Angels.

From the start Masterson was in command. His poise was impressive. He was in trouble only once, and got a DP to get himself out. He allowed just a home run to Mike Napoli, on two hits in six innings while walking two. He was sent back to Portland right after the game.

Masterson left with a 3-1 lead, and Tito turned it over to his pen. They were the Boston Arson Squad on this day, as none of the relievers brought in, namely Javier Lopez, Manny Delcarmen, Hideki Okajima, David Aardsma and Julian Tavarez, did anything to help Justin get the win. They allowed six runs over three innings, and let a great debut from the rookie go up in smoke.

David Ortiz, who hit a bomb to center that would have been out of most parks and was caught by Torii Hunter in the fifth, hit a two-run shot with two outs in the ninth to make it 7-5. But that was as close as the Red Sox could make it, and they lost the series to the Angels.

Now it's off to Tampa to open a three-game series with the Rays, with Wakefield, Clay Buchholz and a returning Josh Beckett taking the hill this weekend.
Posted by The Omnipotent Q at 12:29 PM