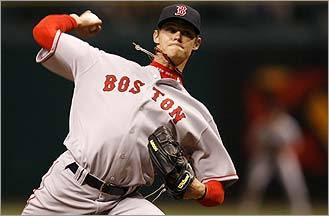 The Red Sox dropped their second straight game at Tampa on Saturday night, and the shame of it was that it was a fabulously pitched game by Clay Buchholz (pictured) that went to waste. They have now dropped four straight, as Sean Casey was put on the DL after injuring his hip on Friday night.

Buch pitched his best game since the no-hitter last September, allowing just one hit until the eighth. He gave up a hit to Dioner Navarro with one out and the Sox holding a 1-0 lead. With two outs, Akinori Iwamura connected into the right field seats to make it 2-1 Tampa Bay lead. Buchholz got the last out and pitched a complete game loss. The bullpen was rested tonight, something it desperately needed.

Iwamura better be careful when he steps into the batter's box tomorrow, as he needlessly did that stupid "bat flip" after he hit the home run. It was just his first home run of the year. I'm certain that the Red Sox' starter on Sunday, Josh Beckett, witnessed it and took some mental notes as it was transpiring.

Tampa Bay is a better team then they were last year, but offensively, the Sox looked sluggish last night. The flu bug hasn't helped matters, and David Ortiz was given the night off, after going 0-for-6 on Friday. Edwin Jackson pitched a fine game for the Rays. I never thought I'd write this, but Josh Beckett goes for the Red Sox on Sunday in an effort to avoid getting swept in the Tropicana Dome.