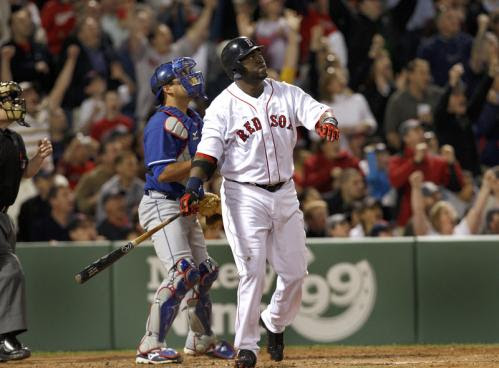 David Ortiz finally got his first hit at Fenway Park this season, a big third inning grand slam off Texas starter Luis Mendoza in leading the Sox to an 11-3 win at the Fens last night.

It was a night when just about everything went right for the Red Sox. Papi's second homer of the year landed in the Monster seats to make it a 4-1 game. Daisuke Matsuzaka pitched 5 1/3 innings and allowed two runs to get his fourth win of the season in five starts. Jed Lowrie started for the first time at shortstop and doubled and hit a sacrifice fly, as the Red Sox scored four in the third and five in the fourth.

There was a sense of relief for all involved seeing Papi take one deep. At first he got the silent treatment when he entered the dugout, but he was swarmed by his teammates shortly afterwards.

Mike Timlin pitched a 1-2-3 ninth, his first perfect frame of the season, after some pretty rough outings.

I'll be at Fenway, TODAY, waiting for Papi and Manny Dingers and, maybe, one from YOUK:

Coverage of Manny's At Bats from Fenway Park, on my blog+Fenway Photos.