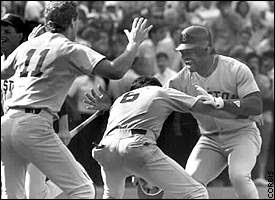 The Red Sox are currently in a 3-1 hole in the ALCS against the Indians, so to boost the morale of the troops out there, I thought this would be a good time to review those times when the Red Sox have been down by at least two games or more in a postseason series and have staged miraculous comebacks.

It's happened four times in the last 21 years, and no other team in MLB can make that claim. So please don't pull the shroud over the Sox just yet.

1986 ALCS vs. California Angels (down 1-3): It looked all but over as the Red Sox were down 5-2 in the ninth against Angels starter Mike Witt. Bill Buckner led off the rally (everyone forgets that) and singled, and Don Baylor hit a two-run homer to make it 5-4. Then manager Gene Mauch pulls Witt for Gary Lucas with two outs, and he hits Rich Gedman with his only pitch. He then brings in Donnie Moore to face Dave Henderson. On 2 and 2, Henderson hits one of the most dramatic homers in Red Sox history to give the Red Sox the lead (pictured). California ties it in the ninth, but Hendu's sac fly in the 11th is the game-winner. The Red Sox return home and demolish the Angels and win the AL pennant. It is still one of the greatest and most underappeciated comebacks in MLB history, and only eclipsed by the same Sox team 18 years later.

1999 ALDS vs. Cleveland Indians (down 0-2): After getting pummeled in Game 2 in Cleveland, the Red Sox return home and do some pummelling of their own. They win Game 3 9-3, and in Game 4 set an MLB record by beating the Indians, 23-7 to force the series back to Cleveland. The first few innings are a slugfest, which included a grand slam by Troy O'Leary. With the game tied 8-8 in the fourth, Pedro Martinez comes out of the bullpen and pitches six no-hit innings and place in Red Sox and MLB lore and the Red Sox go on to win, 12-8 and face the Yankees in the ALCS.

2003 ALDS vs. Oakland A's (down 0-2): The Sox drop the first two games in Oakland, and return to Fenway and the A's make a number of base running blunders that keep the Sox in the game. It's tied at 1 until the bottom of the 11th when Trot Nixon hits a two run homer into the centerfield bleachers to send the Fenway Faithful into a frenzy. The next day, the Red Sox come from behind twice, the winner being a two-run double in the eighth by David Ortiz off future Red Sox hero Keith Foulke. Game 5 features all kinds of excitement, from a Manny Ramirez bomb, Pedro Martinez pitching seven gritty innings, a scary collision involving Johnny Damon and Damian Jackson, and Derek Lowe coming out of the pen to strike out Terrence Long with a 3-2 curve with the bases loaded and two outs and a one-run lead. It would set up the latest "War to End All Wars" with the Evil Empire in the ALCS.

2004 ALCS vs. New York Yankees (down 0-3): The stuff of legends. It will told and retold down through the years. 100 years from now, it will still be "The Greatest Comeback in the History of American Sports." You know the events. Dave Roberts steals second and scores the tying run in the ninth on Bill Mueller's single. David Ortiz wins it with a blast. He also wins Game 5 with a single to short center. Curt Schilling and The Bloody Sock gets the Red Sox to Game 7. The Red Sox come out firing in the first inning of Game 7 and embarrass the Yankees and the fans on their own home turf and win their first AL pennant in 18 years and go on to win their first World Series since 1918, and end all of that media-driven "curse" nonsense.

So my friends, recent history has shown that when the Sox have their backs to the wall, they've played some of their best postseason baseball in the last generation. We'll find out what happens tonight, as Josh Beckett gets the ball against C.C. Sabathia. Beckett's been in this same exact position before, as a member of the Florida Marlins, he shutout the Chicago Cubs in Game 5 of the 2003 NLCS, as the Marlins were down 3-1 in that series and came all the way back to win the NL pennant (and then the World Series as well).

65 teams in MLB postseason history have been down 3-1, and 10 have come all the way back to win the series, including the Red Sox, on two of those occasions. The last time any team has come back from 3-1 in the postseason? Did you have to ask? The 2004 Red Sox.

It's in their hands now. They have to score some runs for Beckett tonight, and get the ALCS back to Fenway. A loud and raucous crowd will be at Professor Thom's tonight to root them on.

& in the paraphrased words of The Late, Great Jack Buck:

The Indians last night did show that they do make mistakes under pressure. We'll see who responds better to pressure in the next game. Or two.

We will absolutely see who takes over this series in Game 6. This was the stage that Schilling was born to play on, and has been there before.