Twice in a Lifetime 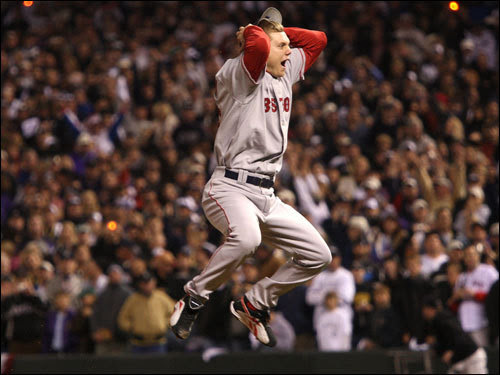 Jonathan Papelbon threw a 2-2 heater past pinch-hitter Seth Smith shortly after midnight ET last night, and I witnessed something I thought I would never see in my lifetime: the Boston Red Sox winning a World Series championship. For the second time in my lifetime.

They also became the first team in the 21st Century to win the World Series twice.

I'm still in a state of shock as I write this. My body hurts all over from celebrating last night, and I'm dead tired. In the immortal words of David Letterman, "You're tired, but you know, it's a good kind of tired."

It was another memorable, historic win for the Red Sox. Jon Lester completed the "Hollywood Ending" last night as he pitched 5 2/3 innings of solid ball, allowing just three hits and striking out three. It's a truly remarkable story he's writing, as he battled cancer at this time last night. Another cancer survivor, Mike Lowell, hit a big home run and scored the second run with a fabulous slide at the plate. He would be voted MVP of the series and deservedly so. But this entire lineup could be considered the MVP.

It seemed like everyone contributed to this four-game sweep. Jacoby Ellsbury and Dustin Pedroia both had tremendous series, as the sparkplugs at the top of the lineup, and figure to be there for the next decade. Bobby Kielty saw only one pitch as a pinch-hitter in the eighth inning, and hit what would be the deciding home run. J.D. Drew had a great World Series, as did Julio Lugo, who was great at both the plate and in the field.

Terry Francona once again managed this team will such skill, and is now 8-0 in the World Series. The Sox became the second team in history to win two straight World Series by sweeps.

There are so many great stories connected with this win, and Jon Lester's is the one the comes to mind the most readily. But as I was watching the celebration coverage last night, Tim Wakefield was being interviewed by NESN. Mike Timlin came over and talked about what a great teammate Wake is, and his stepping aside for the good of the team is a measure of the man's greatness. Wake was on the verge of bursting into tears, and I nearly was too. It was one of the best Red Sox postseason moments I've ever seen. Thanks to Sarge for reminding everyone just what a class individual Tim Wakefield is, one of the best men ever to wear a Boston Red Sox uniform.

I'll have a separate post coming next about the celebrations at Professor Thom's. But here's to the Boston Red Sox, your 2007 World Champions. I can't wait to go through another season to hear announcers refer to the Red Sox as "defending World Champions."

It just never gets old.
Posted by The Omnipotent Q at 12:24 PM