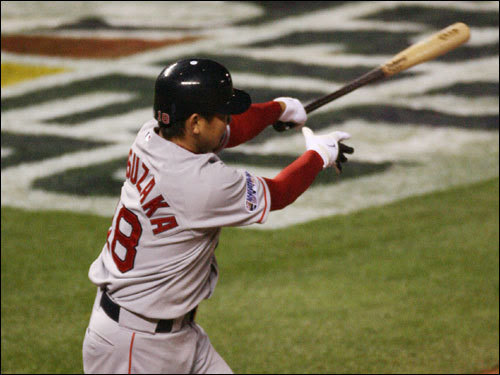 No, this isn't about how Alex Rodriguez has fared against Daisuke Matsuzaka in the regular season.

Matsuzaka shocked the baseball world, and everyone in Professor Thom's pub last night, by hitting a two-run single in the six-run third to extend the inning and give the Red Sox a comfortable lead at the time. Josh Fogg threw Dice-K a lollipop over the middle of the plate on the first pitch and he hammered it to left. Like everyone else, he figured he'd probably just look at it and wanted to get ahead in the count. It was Daisuke's first MLB hit in his sixth at-bat.

So now, Daisuke now has two postseason RBI, and that is now one more RBI than Alex Rodriguez has gotten in the last three postseasons. Let me repeat that.

A guy who was told not to the swing the bat in spring training now has driven in more runs in one postseason at-bat than a guy who hit 54 home runs this season, driven in over 400 runs the last three seasons, and will win his second MVP in the last three years.