The Night of The Rookies 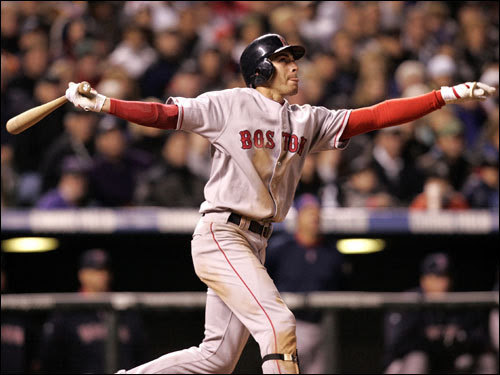 It was simply an incredible night at Coors Field last night, as the Red Sox took their next step to securing their seventh World Series championship with a 10-5 win over the Colorado Rockies. They now have a commanding 3-0 lead in the series.

And most of the damage was done by three Red Sox rookies: Jacoby Ellsbury, Dustin Pedroia and Daisuke Matsuzaka. (Granted, Dice-K really isn't a rookie, but it's his first year in MLB.)

The Red Sox jumped all over Josh Fogg for six runs in the third inning, and Jacoby Ellsbury (pictured) had two doubles in the inning. The most surprising hit of the inning was by Dice-K, who with the bases loaded, two outs and three runs in, hit a hard single to right on the first pitch to drive in two. That led to Ellsbury's RBI double that capped off a spectacular inning.

Dice-K did exactly what the Red Sox wanted him to do last night. He got the Sox to the sixth inning with the lead. He walked two men with one out, and was lifted for Javier Lopez. Lopez hasn't pitched well in this postseason, and gave up two singles to make it 6-2. Mike Timlin then came on to get the last two outs to restore order.

But Timlin allowed two Colorado runners to reach in the seventh, and was replaced by Hideki Okajima. The first pitch bu Okie was hammered by Matt Holliday to make it 6-5. More than one friend said to me last night, "They can't do it the easy way," and"It wouldn't be the Red Sox without some drama." The bar was doing a collective sweat, but Okajima shut Colorado down the rest of the inning.

The Red Sox, who look like a team on a mission, took those three runs back, on two singles and a RBI doubles by Ellsbury and Pedroia to make it 9-5 and short-circuit any Colorado momentum. It was simply a fabulous night for both of them, as Ellsbury went 4-for-5 and Pedroia went 3-for-5. Together they scored four runs and drove in four. Jacoby also became the first rookie with four hits in a World Series game since Joe Garagiola in 1946. Jonathan Papelbon came on with two outs in the eighth to record his second save of the series.

The Red Sox now need one more win to take it all, and Jon Lester, who battled lymphoma at this time last year, will get the ball tonight against Aaron Cook. This has "Hollywood Ending" written all over it. Tonight we will indeed see if that does become a reality.
Posted by The Omnipotent Q at 12:21 PM

Quinn, you and I scored very few runs in Jere's contest, but the Sox scored enough for all of us!

2090 my ass! Two thousand fucking seven. Of all the blocks you walk up/down in NYC tomorrow with your Sox hat on, please walk one for me, Quinn.

We didn't do well in Jere's WS contest, but that's OK. The Sox gave us plenty of thrills to make up for it!

Done, Jere. I will wear my Sox hat in your honor on Monday...