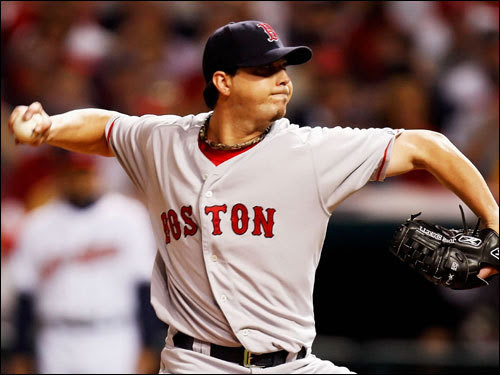 Josh Beckett's reputation as a big-game pitcher took a giant leap forward last night as he put the Red Sox on his back and pitched eight sensational innings as the Red Sox won, 7-1 and forced the ALCS back to Boston for a Game 6.

Commander Kick Ass allowed a run in the first on two base hits and a double play. But that was all he would allow. Cleveland put two men on in the fifth with two outs, but he struck out Asdrubal Cabrera to end the threat.

Earlier in that inning, Beckett got into a shouting match with Kenny Lofton after Lofton dropped his bat thinking he had gotten ball four. He flied out on the next pitch as Beckett yelled at him. Lofton cursed back at him, and started walking toward him after he touched first base. Benches emptied but no punched were thrown. (Good job by Fox after the game showing the history between them. In 2005, Beckett was shown jawing with Lofton after he did that ridiculous bat flip after walking in a game between the Marlins and Phillies.) It was at that point that Beckett drew a line in the sand, and basically told the Indians, "You ain't getting s**t off me now!"

(The Indians even tried to pull a Yankee-like stunt by bringing in Danielle Peck, a country singer and former girlfriend of Beckett's, to sing the National Anthem. They claim to know nothing about their relationship, and it was just a coincidence. Yeah, right. The Commander was not amused, and not at all rattled.)

Kevin Youkilis hit a home run in the first to get it going, and I had a feeling this was going to be the Red Sox night. (My buddy Eric was also wearing his lucky 2003 Syracuse NCAA Champions shirt, one he wore throughout the Red Sox historic eight-straight win postseason as well. So I knew that Game 6 was going to be a reality.)

The umps blew yet another big call when a ball Manny Ramirez hit bounced off the top of the right field wall and back on the field and was ruled in play. it drove in David Ortiz but it should have been a home run because hit went passed the yellow line on the wall. I know it's like beating a dead horse, but MLB umpiring continues to be incredibly awful. That call cost the Sox a run, but fortunately not the game.

The Red Sox tacked on two runs in the seventh and three in the eighth to put the game away. But the story was Beckett, who continues to be "The Anti-Clemens." (Josh now has three times as many postseason wins than Clemens had in his Red Sox postseason career, and in just three starts.)

There will now be a Game 6 at Fenway Park on Saturday night, with Fausto Carmona facing Curt Schilling. There have been four Game 6s at Fenway in its history, and the Red Sox have won them all: the 1918 World Series against the Cubs (and the Sox won the Series with that game), 1967 World Series against St. Louis, the 1975 World Series that featured Pudge Fisk's blast and the 1986 ALCS blow out over the Angels.

So how did Schilling do in his last "Game 6?"

Only two words will answer that question: bloody sock.
Posted by The Omnipotent Q at 12:09 PM