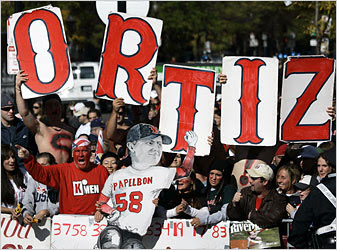 Another gigantic throng lined the streets of Boston yesterday for the second Red Sox victory parade in four years. I caught some of the festivities on ESPNews, as I couldn't head up to Boston to take it all in. (I had Trivia Night to deal with last night.)

ESPNews had NECN's coverage (that is the New England Cable News network), and they only covered the first hour of the parade. The weather was perfect and it looked like over a million people turned out. It seemed like there were thousands of Jacoby Ellsbury signs, and even more "Re-sign Mike Lowell" placards. The Red Sox were once again in the duck boats, but they didn't hit the water this time.

One of my favorite signs was "Johnny Damon's Home Changing Diapers" in reference to the one-time Red Sox outfielder (you remember him) who has a daughter who was born earlier this year. Right after the Red Sox won on Sunday night, I thought to myself, "I wonder what's going through Damon's mind right now?" Now he must REALLY regret his decision to abandon Boston. It's arguable if the Red Sox would have won it all if he was still playing center with them, but if they had, his popularity would be so huge they'd be building statues of him around the city. But Damon needed those extra millions in lieu of keeping his legacy in Boston. I only hope the extra cash makes him happy.

Jonathan Papelbon was the hit of the parade, as I did catch his "Riverdance" on the duck boat he was on as they stopped, with the Dropkick Murphys playing "Shipping Up to Boston" behind him. I didn't see his dance with the kilt he was going to wear, but I heard it was great.

The Sox now hit the late night talk show circuit, as Papelbon will be appearing with David Letterman tonight on CBS. David Ortiz will be with Conan O'Brien on Friday night, and in the most intriguing appearance of all, Manny Ramirez will be on the Tonight Show with Jay Leno just before Papi's Conan date on Friday. I can't imagine what he'll say, or better yet, what he'll be wearing.