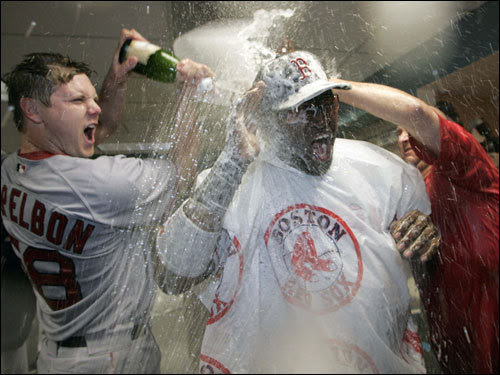 It was a scene of jubilation at the visitors clubhouse at Angel Stadium, as well as Professor Thom's pub yesterday, as the Red Sox rolled the LA Angels, 9-1, and booked a spot, as well as home field advantage, in the 2007 American League Championship Series.

It was the ninth straight win by the Red Sox over the Angels in the postseason, tying a current record. The streak began in Game 5 of the 1986 ALCS, when Dave Henderson hit his memorable ninth inning home run to start the Red Sox amazing comeback in that series.

Curt Schilling once again proved what a big time money pitcher he is as he pitched seven strong innings, as the Red Sox blew the game open in the eighth with seven runs. They will open the ALCS on Friday at Fenway.

It was a scoreless game until the fourth when both David Ortiz and Manny Ramirez hit mammoth home runs off Jered Weaver to put the Red Sox on their way. Incredibly, it was the first time they had gone back-to-back this season. It remained that score until Schilling struck out Jeff Mathis to end the seventh and his day.

Schilling allowed just six hits to an Angels team that was really banged up and could barely put up any kind of a fight. They clearly need another big bat in the middle of their order (Alex Rodriguez?), as the Red Sox pitching just dominated them this entire series, as they hit just .192 in the ALDS.

I did my own kind of celebrating as well, as I got a little "overserved" last night. Heck, it was time to let our hair down and enjoy the day. For the second time in three days, there was some wild celebrating at the bar. (Photos of me celebrating maybe coming here soon.) This is a terrific Red Sox team that is clicking on all cylinders right now, in all phases of the game. Bring on the Indians or (heaven forbid) the Yankees!

Posted by The Omnipotent Q at 9:46 AM