A Record-Setting Game One 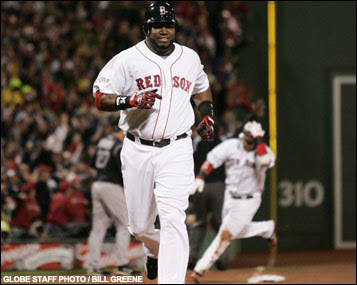 The Red Sox took the Colorado Rockies out to the woodshed last night at Fenway Park and showed them what American League baseball is all about.

It got ugly in a hurry for Colorado, as Dustin Pedroia led off the game with a home run that just cleared the top of Green Monster to give the Red Sox a 1-0 lead. He became the first player to lead off Game 1 with a homer since Don Buford led off the 1969 Fall Classic against the Mets with one.

In the immortal words of Warner Wolf, "You could have turned your sets off right there."

The Sox added two more runs in the first, and it would be all Josh Beckett needed. The best pitcher on the planet right now struck out the side to begin the first, showing the boys from Colorado that he meant business. The Rockies got a run back in the second, but that was all Beckett would allow. The team that had won 21 out of 22, and 10 in a row looked like high school kids compared to the Red Sox.

The Red Sox added three more in the fourth, and exploded for seven in the fifth. Colorado sure looked like the long layoff effected them, as Jeff Francis had nothing, allowing six runs in four innings. The Red Sox tied a World Series record by hitting eight doubles, and set a record with 9 extra base hits. And they did it all by the fifth inning. Five players had two RBI, and three players had at least three hits, so the wealth was spread all around. Everyone but Mike Lowell had an RBI in the game.

The 13-1 win set a records for the Sox. It was the most runs ever scored in a Game 1, and the largest margin of victory in the opener as well. They also became the first team to score 10 runs in three consecutive postseason games. Since Game 5 of the ALCS, they have outscored the opposition, 43-6. Talk about smoking hot.

Beckett pitched seven innings, striking out nine and walking one. It was his fourth straight postseason win, and he now has three more in his Red Sox career than Roger Clemens ever had. Tonight, Curt Schilling takes the mound against Ubaldo Jimenez in Game 2.

Q, Q, and Q again. You have to be happy! Enjoy tonight....Schill has something to prove!

Schilling's always been a big game pitcher, and I expect him to come big. If the series doesn't reach Game 6, it maybe his last start with the Sox.

Just wrote a post about game two in which I used a classic Warner Wolf quote, came here, and saw you'd used one in your game one wrap. I guess some people just have a big effect on us.

This is Jere Smith. Jim?

I loved Warner Wolf because he usually showed Red Sox highlights back in the 1980s. I guess he realized that there were many Red Sox fans watching, especially in Connecticut.

I guess he left a lasting impression on us both, Jere...

Is it me, or are Buck & McCarver getting worse at what they (already) do (piss-poorly)?

I do believe they referred to our boys as the White Sox on two separate occasions last night.

Remember when they couldn't spell Schilling's name at Fenway?

Buck did call us the White Sox. Come on, give us a break!

Buck's head is probably more into the football season anyway....