Bring On the Tribe! 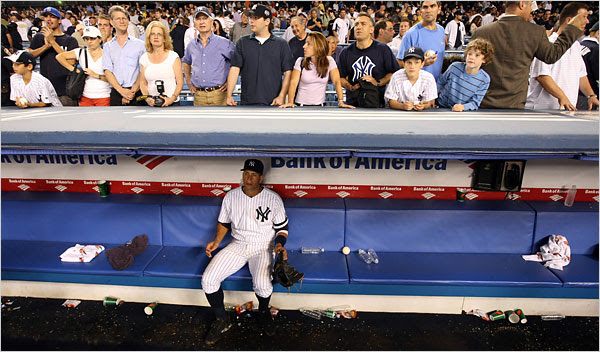 The Cleveland Indians, the AL Central winners, advanced to the American League Championship Series tonight, as they beat the Yankees, 6-4 at Yankee Stadium. They will meet the Red Sox in a best-of-seven for the right to go to the World Series starting on Friday night at Fenway Park.

This series was a classic example of what I have been saying all year: the team with best pitching wins in the postseason. Chien-Ming Wang, who was pitching on three days rest for the first time in his career, couldn't get out of the second inning, giving up four runs and was gone. He was supposed to be the Yankees best pitcher, but gave them two miserable starts. (So you can't blame all of this on Alex Rodriguez, even though he didn't exactly light up the scoreboard in this series.) Paul Byrd pitched five good innings for Cleveland, allowing two runs and getting the win.

It's now seven years and counting that the boys in The Bronx have not won a championship.

Grady Sizemore led off the game with a home run, and the Indians were off to the races. The Indians clearly had superior pitching to New York, in both the bullpen and rotation. You can put an All-Star at every position, but if you don't pitch, you don't win. It's as simple as that.

The Yankees have now gone out in the Division Series for the third consecutive season, so once again, a team with a $200 million+ payroll comes up short. (For those of you scoring at home, the Yankees, since the 19-8 win over the Red Sox in Game 3 of the 2004 ALCS, are now 4-13 in the postseason.) Changes are on the horizon for them. All the speculation will be on the futures of Joe Torre, Alex Rodriguez and Roger Clemens. I bet you see a very different team there next year.

So now, it's the Indians and Red Sox, starting on Friday night. It should be a great series, and I'll really enjoy watching this one. Congratulations to the Indians and their fans.

See you at the Fens on Friday.
Posted by The Omnipotent Q at 12:07 AM

They were the Team Of The LAST Century;

If there are Major Changes, I don't see them in contention again for awhile.