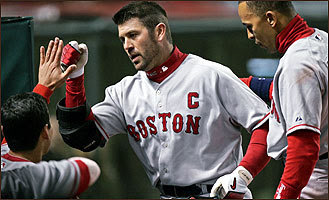 Jason Varitek (pictured) came of the bench last night and hit a game-winning pinch hit home run in leading the Red Sox to another ninth inning win over the Indians in Cleveland last night.

The Red Sox are back in first place (I know it's just 15 games in) as Jed Lowrie got his MLB hit, a really important one that drove in two runs in the seventh. Lowrie also had one earlier in the game as he beat out an infield grounder to prevent a DP and allowed a runner to score from third, for the Red Sox first run of the night.

I would guess the Indians are glad to see the Red Sox leave town, and the only way they come back to Cleveland for the playoffs, as because of the bizarre schedule (thank you interleague), the Red Sox play the Indians only once at the Jake. (Don't bother me with new corporate stadium names.)

Tim Wakefield's knuckler was dancing, but he was also walking batters. He gutted out six innings and allowed just two runs. Manny Delcarmen hit Ryan Garko with the bases loaded to tie it up at 3 in the bottom of the 7th. This set it up for Tek's heroics, and they added another run in the inning. Hideki Okajima pitched a 1-2-3 ninth for the save, and it was capped off by a sensational catch in the right field stands by Jacoby Ellsbury.

Now it's off to New York City for a two-game series with those guys who are moving into that new ballpark next year that the new co-chairmen ordered five jackhammers into last Saturday in order to thwart the beginnings of some kind of new curse that at first they said didn't exist because there was no jersey buried there but then it didn't matter at all because curses were BS but they went ahead and did it anyway and got that evil thing out of there and donated it to the Jimmy Fund because it would make them look classy instead of the paranoid fools that they truly are.

You know, the Yankees.
Posted by The Omnipotent Q at 12:09 PM

to be corporately correct, The Jake is now "The Pro"

I think the burying of Papi's shirt hurt Papi more than anything else. Now that it's been unearthed, he'll break out of the slump :-)

I feel the same way, Suldog. I sense a two-homer game is coming soon...